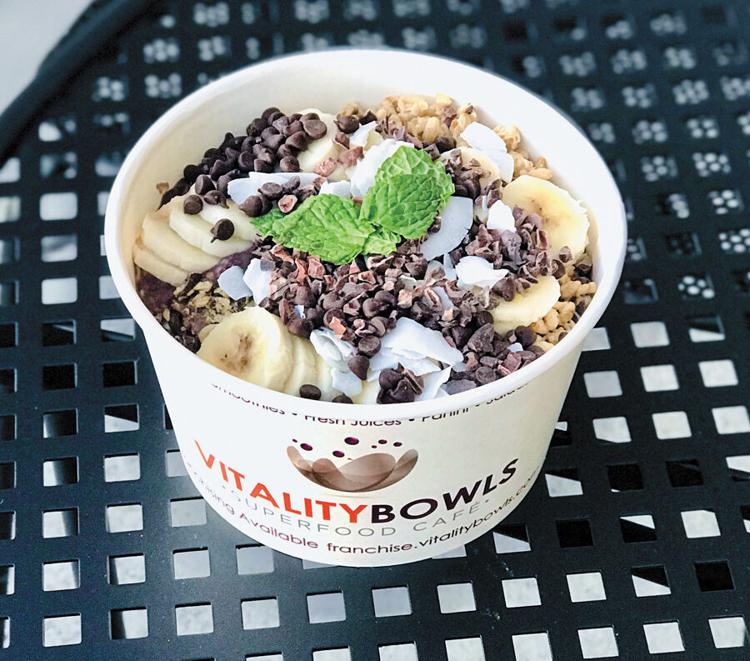 So it’s the new year, and we all hope 2021 has something better on tap for us than 2020’s hot rotten dumpster fire to end all dumpster fires. And since we’re in the first full week of January, you’re probably still kicking ass on your New Year’s resolutions. (Next week will be a different story, when you will assuredly fall off the wagon.)

It seems fitting to launch our new year’s food review calendar with something light and healthy and on-diet for anyone taking early dining austerity measures. And that something is Vitality Bowls, a locally owned franchise of a nearly 140-location California chain. Owners Shelly Hood and Elisabeth Everett are military spouses and also work together as mortgage lenders in town. They came to this enterprise with concerns over their families’ food allergies, which relates to the founding of the company as a whole. They say they were impressed after speaking to the corporate owners, who were savvy but down-to-earth and relatable, encouraging them to personalize the style of their location (hence reclaimed wood, a fireplace and a cool color tone to match mostly frozen fare).

Vitality Bowls’ menu leans heavy on açaí bowls, smoothies and juices, with a short panini sandwich and salad/soup section as well. But going to a place that specializes in bowls and smoothies for those latter items seems to miss the point, like drinking tea in a fine coffee shop. Like, yeah, you can, but why would you? That’s what I realize  after ordering a kale salad as part of my second-visit meal. It’s just fine with quinoa, hemp seeds, cucumbers, goat cheese, celery and slices of scantly seasoned grass-fed sirloin (an upcharge option) with a Turmeric-Dijon vinaigrette, but in the end it’s a modest salad with no high points in a land of vibrant fruit drinks laced with naturally sweet things.

If you happened to count, in that salad you’ll note four trendy ingredients in the health food world, including turmeric, revered for its anti-inflammatory properties (and ability to stain dish towels, aprons, shirts, teeth, etc.). That’s pretty much how all items read at Vitality Bowls: lists of ingredients that provide the eater with something like moral superiority, that distinct feeling that you’ve made wise food choices and surely will live longer now, or at least feel less bad when you eat like shit the next day. (“Hey, remember when I had that carrot?”)

There are plenty of familiar items with common fruits, and good luck finding the few things that don’t contain the simian’s best friend: bananas. So I aim for the items with new-to-me ingredients, which is saying something because I’ve been a dirty hippie for decades and thought I knew most all of the superfoods out there. (I mean, dude, I shop at Natural Grocers and Mountain Mama religiously.) Kudos to Vitality Bowls for sending me googling several times. Do any of you know offhand what aronia, moringa and camu camu are?

Didn’t think so. No worries; there’s explanatory posters on the walls with pictures and big words like “phytochemicals” and “plyphenols” and “xanthones.” My Green Bowl starts with a base of graviola, also called soursop, which is a derivative of a rainforest tree. (How can THAT not be good for you?) There are nine inputs to the base purée, including spirulina, plus five toppings that include granola and kiwi. For all its chlorophyll there’s more than ample sweetness from berries, dates and honey, leaving me questioning the overall true healthfulness given the high sugar content (which is at least buffered by fiber and the nutrients). We treat the bowl-of-the-month special, called the EnjoyMint Bowl, like dessert, given cacao, coconut milk and chocolate chips in its base, plus more chocolate chips and cacao nibs as toppings. Oh, and both have … you guessed it, bananas. Fresh mint leaves exude a nice herbal essence and granola gives more crunch to counter the sorbet-like açaí base.

For smoothies, we’re drawn to the Pitaya Punch (because what the hell is that? — oh, another name for dragon fruit) and Immunity Smoothie (because bro, there’s a pandemic goin’ on and I’ll take all the armor I can get). The pitaya would normally be pink and pretty with some chia seeds, spinach, strawberries and mango blended in with fresh-juiced orange and coconut milk, but I add some moringa (a plant the poster says is iron-rich, containing all nine essential amino acids — wowsa) which renders mine more brown-hued somehow. It tastes like island fruit generally, with hints of pineapple though none’s present.

The Immunity Smoothie starts with acerola (which has nine other names online including West Indian, Puerto Rican and Barbados cherry and contains high vitamin C) and gets almond milk, lemon, kale, mango and banana plus a house “immunity blend” of powdered superfoods presumably plus camu camu (another rainforest item supposedly good for muscle repair and the nervous system). I add aronia (a purple berry purportedly good for circulation and detoxification), and there’s also one other key ingredient included: raw ginger. So much raw ginger that the staff asks if we like raw ginger because this drink stings big with zing and they know it. And I do love juiced ginger so I can generally tolerate it straight. I’ve bitten the root straight plenty of times while traveling to stave off motion sickness or a grumpy belly. And you may as well be doing that when drinking this because the ginger’s so prominent. I can’t tell you what acerola or camu camu or aronia taste like because they’re all buried behind the spicy rhizome heat.

This is by no means a balanced drink, but I’m left to believe that there’s so much damn nutrition in it that who cares, I’m probably invincible to germs for a few hours, pumped with so many antioxidants that I’m playing offense by securing defense. And there you have it, that internal superiority-like sense of having chosen well — fruits and superfoods instead of nearby fried comfort foods of many sorts found off North Gate Boulevard.

Ultimately that’s what these smoothie and juice places give us. The more substantive option we can feel good about. And that’s what new beginnings in the new year are all about. I’m obviously employing Vitality Bowls as a framework here, relative to the timing of this review. But here’s to a sweet, healthier and happier 2021 ahead. Let’s hope it doesn’t all go bananas.