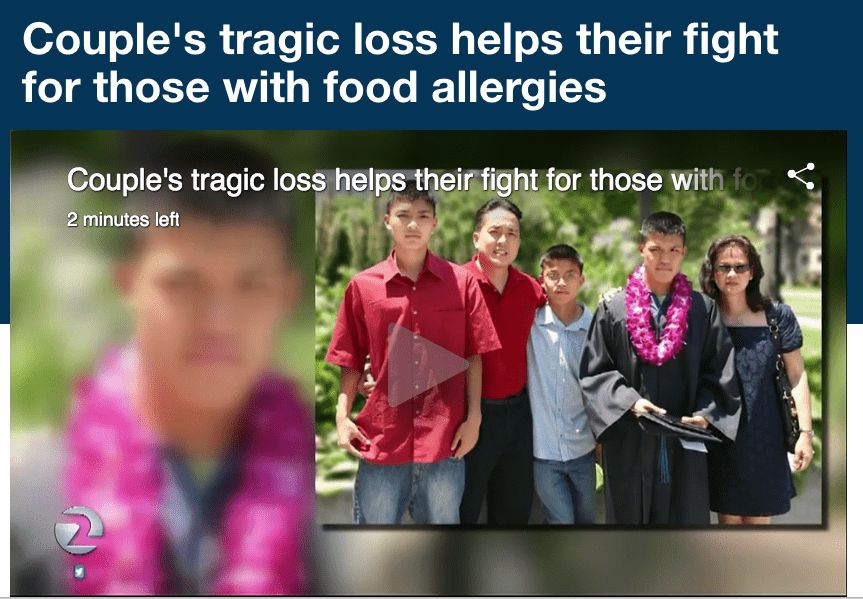 BY KTVU-TV – They’re planning to open two cafes, Vitality Bowls in San Jose in memory of their son BJ who died from his allergy to peanuts.

Opening this cafe on Cottle Road was a dream that BJ shared with his parents. They wanted a family-owned business.

The teenager died eight years ago. Now, the Homs plan to open the first of their two cafes February 2nd.

“By doing this, it’s a way to honor my son and help him save other lives,” says Brain Hom, BJ’S father.

In 2008, BJ had just turned 18 and graduated from high school. The family was on vacation in Mexico. A short while after arriving, BJ ate a dessert that had peanuts in it.

His parents say his previous reactions had never been severe. He would suffer hives. This time, he had an anaphylactic reaction. It was deadly. He stopped breathing.

His parents say his previous reactions had never been severe. He would suffer hives. This time, he had an anaphylactic reaction. It was deadly. He stopped breathing.

“We were in shock. We didn’t know what to do,” says Brian.

Their youngest son Steven also suffers from a peanut allergy. The couple has turned their grief into action.
The Homs helped get federal and state legislation passed to prevent other families from losing a loved one to a food allergy.

“Losing a child a parent’s worst nightmare. You never think about burying your own kid,” says Brian.

The most recent legislation the couple worked on is a state law that went into effect January 1 allowing epinephrine to be stocked at restaurants and other public venues. The medication is injected.

The Homs hope to set an example by stocking the epinephrine in their cafe. Every customer will be asked whether they have a food allergy. If they do, their food will be prepared with separate appliances and utensils to prevent cross contamination.

Should anything unforeseen happen, the Homs have installed a special alarm system that has a special button to call for an ambulance and another for the fire department.

Kathy, Brian’s mom, says she copes with BJ’s loss by opening this cafe, cherishing the memory of his daily phone calls. read more