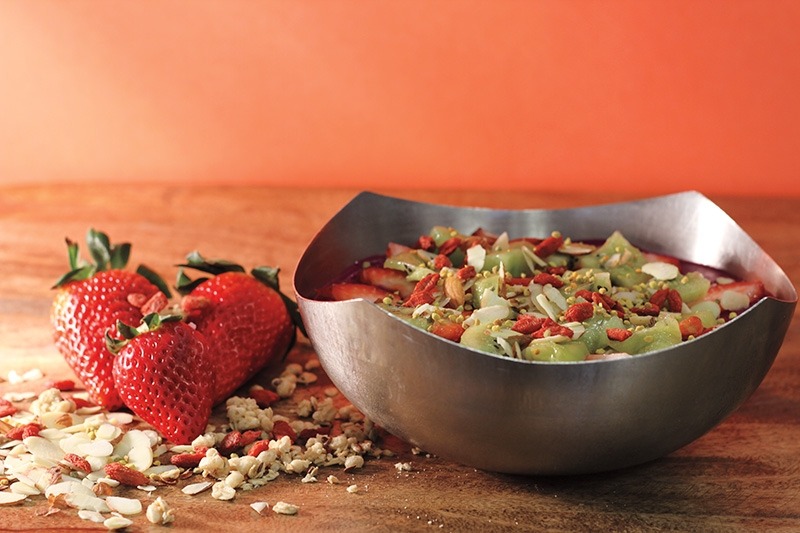 BY DIABLO MAGAZINE – Vitality Bowls’ cofounder Tara Gilad will tell you “there is nothing on this planet” as powerful or nutritious as the açai berry from the Amazon. While opinions vary, it’s clear that açai (ah-sigh-EE) is powering Vitality Bowls’ remarkable success, with berry bowls accounting for 85 percent of sales. read more

When we spoke with her, Tara and her husband, Roy, who live in San Ramon, owned three stores (San Ramon, Pleasanton, and Walnut Creek). Their first franchised spot had opened in Indiana, and by April, there should be seven stores. By the end of the year, they plan to open 32 Vitality Bowls locations: one in Texas, two in Indiana, two in Orange County, and the rest in the Bay Area.

“Healthy food is the future,” says Tara. “It really is.”

Creating a standard small-size bowl takes 150 dark purple açai berries, which are pureed to order with frozen fruits and vegetables into a thick smoothie-like base. The menu’s dozen-plus variations are topped with fresh fruit, honey, and organic granola, plus extras ranging from almonds and shaved coconut to superfoods such as goji berries and bee pollen.

“That one has broccoli in it, and the açai berry itself is bitter and chalky. So we use blueberries and raspberries to mask it.”

While the original menu was carefully crafted with endless taste tests, designing the restaurant—which has since been upgraded—was improvised. “I bought our first tables and chairs from Costco. I bought the cheapest tile I could find at Home Depot,” Tara admits.

There’s a formula now for their franchisees, of course, but Tara encourages owner-operators to buy local and personalize their design. Still, Tara says she and Roy (and a quickly growing corporate team) are “involved every second getting them up and running.”

Thankfully, Tara, who has two young kids, still has time for an occasional warrior bowl—with its flaxseed and multivitamin boost. vitalitybowls.com.